Lydia Wilson is Culture Editor at New Lines magazine, and also a visiting fellow at the University of Cambridge’s Department of Middle Eastern Studies, a research fellow at the University of Oxford’s Centre for the Resolution of Intractable Conflict, the chair of the Permanent Monitoring Panel for Terrorism and Conflict at the World Federation of Scientists, and the Volkan Scholar at the International Dialogue Initiative. After a BA in Natural Sciences, Lydia did an MPhil in History and Philosophy of Science and a PhD in medieval Arabic philosophy, all at the University of Cambridge. In between degrees, Lydia tried to learn Arabic in Dubai, not realizing how little Arabic was spoken there, and so tried again in Syria, with rather more success.

After a PhD spent on translating and contextualizing Al-Farabi (when she also co-founded the Cambridge Literary Review, a journal specializing in experimental writing), Lydia turned her back on medieval studies and went to Iraq on a research grant to study when and where people make the most extreme sacrifices for a cause, interviewing amongst the PKK initially. When the Islamic State group declared a Caliphate, her research expanded to cover the phenomenon of those joining the fledgling caliphate, interviewing ISIS prisoners, families, recruiters and others across the MENA region and Europe. This work continued during postdocs in Cambridge, New York, Oxford and then back at Cambridge, and expanded into consultancy for U.N. agencies, government and NGOs on Countering Violent Extremism.

Throughout this time Lydia wrote journalism as well as academic articles on conflict, terrorism and culture, her articles appearing in Time, the New York Review of Books, the Nation, the Times Literary Supplement and many other outlets. She also dabbled in broadcast journalism, presenting the 3-part BBC television series “A Secret History of Writing,” and regularly speaking as an expert on various international channels. During lockdown, with travel impossible, Lydia joined the University of Cambridge’s Computer Lab to work on patterns of online radicalization, and this is when she also joined New Lines as a contributing editor. There was no way back from this step into the New Lines fold, and responsibilities increased until she became full-time in April 2022.

Lydia welcomes pitches on any aspect of culture, social or artistic. 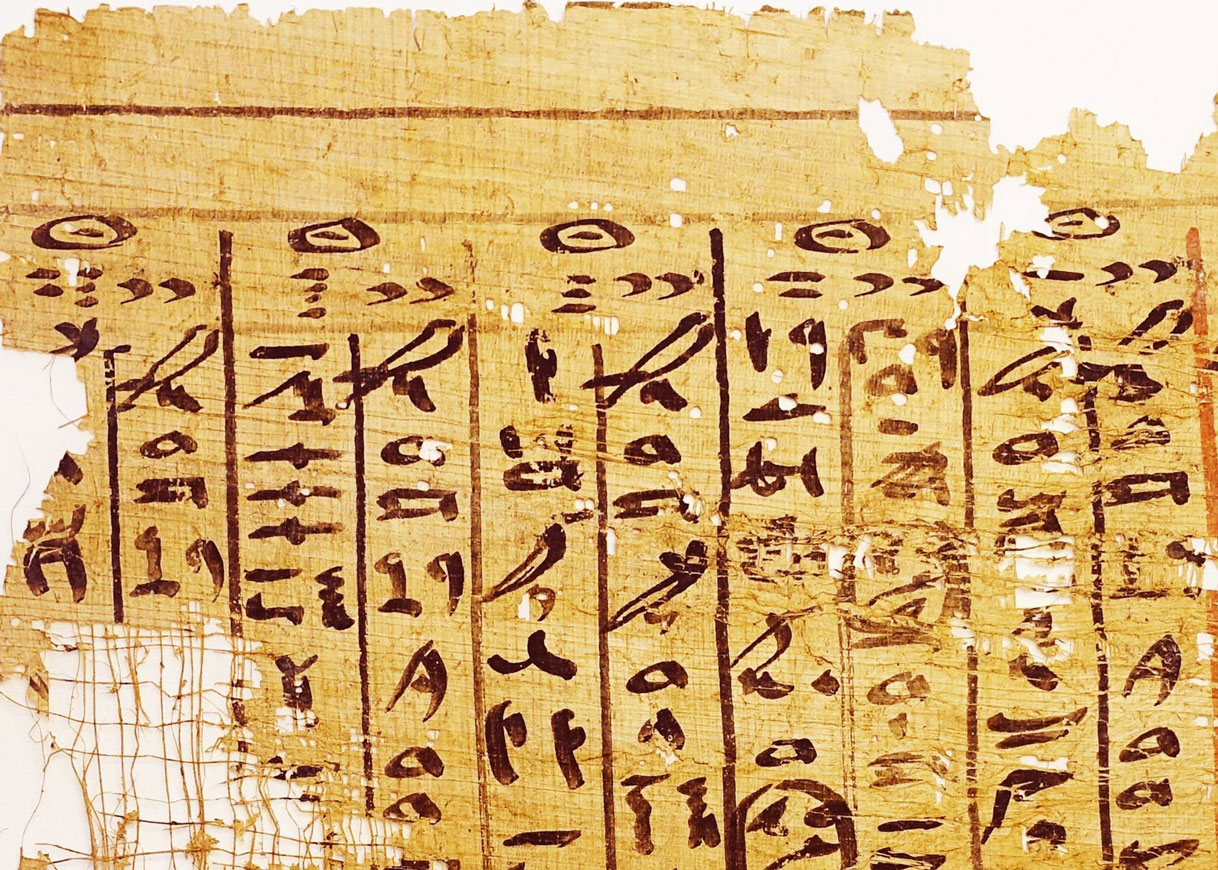 Who Invented Paper? A New Discovery in Egypt Upends the Consensus Governments all over the world have been courting the more extremist elements in their society, bringing them into the mainstream, legitimizing their demands and grievances, and Israel is no exception. Peterson’s popularity with far-right audiences and pundits shows that he understands the power of the extremes, but more, his writings and broadcasts show how aligned he is with their thinking. Titi Maurice is a native speaker of Coptic, which puts her in a group of only hundreds worldwide. “As long as Coptic exists, no matter how small the number of speakers, it connects us to ancient Egypt,” she says. Now a number of initiatives are aimed at reviving that connection to the language of the pharaohs. Whatever your feelings about the monarchy, queen, Commonwealth or empire, the passing of Queen Elizabeth II feels momentous. We Knew It Was Coming, but the Queen’s Death Still Stuns Britain

There is the usual sprinkling of tourists when I arrive at Buckingham Palace at 7 p.m., just a few hours after Queen Elizabeth II died, having reigned for 70 years from this building at the heart of London. Mostly people are more curious than grief-stricken; they’ve gathered to mark the occasion, and more are coming from every direction, by foot, bike and car, black cabs constantly dropping off people who are clutching umbrellas and bouquets. There is affection here for the only monarch that most of us have ever known. Thirty-three years ago, two British Sunni Muslim activists traveled to Iran, where they expressed their outrage over Salman Rushdie’s novel “The Satanic Verses” to a government minister. The very same day, Ayatollah Khomeini issued his now infamous fatwa. Like the fatwa, the attack on Rushdie has unified Muslim extremists across sectarian lines and across the globe. How Jordan Peterson Ruined His Image With Muslims

Gaining fans without really trying, he came to embrace Muslim thinkers and activists on his podcast. Buoyed by his clear adulation from Muslims around the world and the success of many of these recordings, he addressed his fans directly. With his patronizing tone, ignorance of Islam, and disregard for political realities and sensitivities, he has eroded the fanbase he never set out to capture but nevertheless appreciated. Muslims have a message for Jordan Peterson, but whether he will listen is doubtful. In Tunisia, a Day of Reckoning Awaits

Rached Ghannouchi’s colleagues may claim he is coming out against Saied late in the day. But in this interview, he says his position has aligned with Tunisians who initially supported Saied’s constitutional coup only to slowly turn against him with increasing evidence of anti-democratic plans for the country. We are used to thinking of terrorism in terms of extremism, which suggests something on the fringe. But when we look at these disenfranchised angry young men, they have drawn legitimacy for their hatreds — most notably against two main groups, women and Jews — not only from online chatrooms but also from YouTube celebrities, mainstream authors, newspapers, news programs and politicians. If we genuinely want to address and counter violent extremism, we need to start by holding those closer to home to account. We Need to Talk About How We Cover Terrorism

Some argue that over-reporting terrorist attacks plays into their hands by amplifying the message. But we also need to understand the insidious threat of the far right, and we can do so only by paying attention to their words. How an Anti-Muslim Conspiracy Thrives in the UK

Responses to a recent podcast series, The Trojan Horse Affair, vary from lackluster to defensive and show that the U.K. is failing to address its problems with Islamophobia — the very issues the podcast explores. Pervasive use of strategic communications in preventing radicalization has been adopted wholesale by other areas of law enforcement, despite a lack of evidence or understanding of potential harm. Christmas in Britain: Candles for All, God for Some

A citizen celebrates and reflects on Christmastime in the United Kingdom. Lydia Wilson, a New Lines editor, takes us through the traditions, rituals, and — increasingly — opportunities for consumerism in the holiday season in her hometown of York. She also ponders whether this season, rooted in and still reflecting religious rituals and traditions, is also now a time of year for all people to come together. Jordan’s King Abdullah was a central headline in the Pandora Papers scandal. But far from denting his reputation, the elites he draws his power from are seeing it as an attack on Jordan, giving rise to speculation bordering on conspiracy as to who’s behind it, reversioning other political events of the past year. As a result, sympathy for the king has only grown. In a Sea of Broken Glass, Beirut Museums Work to Preserve Their Antiquities

After the explosion last August, help poured in from volunteers and international organizations. The city has been healing slowly, but with the country’s economic and political crises, efforts are stalling. This week in Jordan sees the start of a trial for sedition and incitement, with charges brought against a member of the royal family and a formerly trusted adviser to the king, and the king’s half-brother Prince Hamzah taking the stand as a witness. Lydia Wilson uncovers how this unprecedented threat of instability to the kingdom feels to Jordanians. Prince Hassan bin Talal, ex-Crown Prince of Jordan, has no “delusions of grandeur” for himself but plenty of ambitious plans for his country. He talks to Newlines about his vision for a more participatory system in which the legion problems facing both the planet and human societies are addressed together. Food, especially in a country so famous for its cuisine, is not just about nutrition; it is also about culture. What do you do when you can’t afford the food? You stop inviting people, apart from the ones you don’t feel embarrassed in front of when you can only serve coffee. The Riddle of the Sinai Sphinx

A small sphinx in the Sinai’s Temple of Hathor had carried a riddle for millennia. In solving it, archaeologists discovered how turquoise miners from the East had replaced hieroglyphs with letters and invented the alphabet.